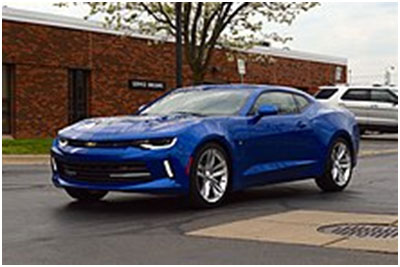 On May 16, 2015, Chevrolet introduced the sixth generation Camaro at Belle Isle park in Detroit. The launch, complete with previous generation Camaros on display, coincided with the vehicle’s upcoming 50th birthday.

The sixth generation Camaro sales began in late 2015 and offered in LT and SS models built on the GM Alpha platform at Lansing Grand River Assembly in Michigan. The Alpha platform is currently used by the Cadillac ATS. The 2016 Camaro weighs 200 lb (91 kg) less than its predecessor. Over 70% of the sixth generation’s architectural components are unique to the car and are not shared with any other current GM product.

The 2016 Camaro will come equipped with both Apple CarPlay and Android Auto Capability features.

For the 2017 model year, the 1LE performance package returns to the Camaro. The package builds off the success of the previous-generation 1LE, offering increased handling and track performance. In response to customer demand, Chevrolet offers two distinct 1LE packages, for both V6 and V8 models, each visually distinguished with a satin black hood, specific wheels and more. The 2017 ZL1 Camaro has a top speed of 205 mph, and a Nürburgring Nordschleife lap time of 7:16.4. The 2017 ZL1 edition is also one of the first cars with a 10-speed automatic transmission, making it the most unique one in its form.

If you are a resident of New York and looking for a Car Appraisal Near Me, feel free to Call us for your free, no-obligation consultation at 1-877-888-6113 today.

For FREE Consultation and Review